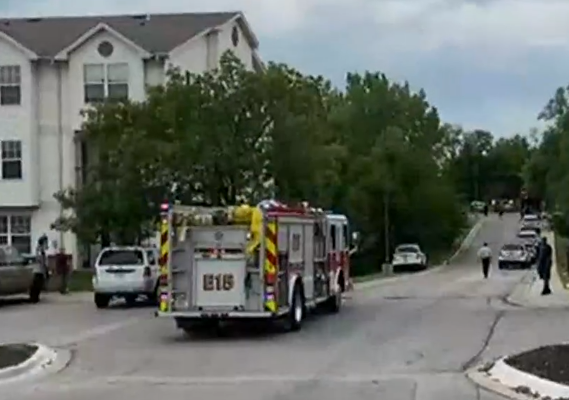 Lincoln, NE (August 23, 2021)  A man who is believed to have intentionally started a fire during a standoff in northwest Lincoln was taken to a hospital after being tased during his arrest. Two police officers were also taken to the hospital with smoke inhalation.

The Lancaster County Sheriff’s Office issued the following statement about the incident:

At approximately 9:00 a.m. on August 23, 2021, members of the Metro Fugitive Task Force and the Special Victims Unit of the Lincoln Police Department went to an apartment building located at 4800 N. 15th Street in Lincoln looking for Veonta Hopper (39).  Hopper was wanted on a recent Lancaster County Court warrant for two counts of Sexual Assault of a Child in the 1st degree.  Law enforcement contacted Hopper in a lower level apartment and he barricaded himself inside a bathroom in the apartment.

Law enforcement negotiated with Hopper for nearly two hours when they observed smoke and fire coming from under the bathroom door.  At this point they breached the door and attempted to take Hopper into custody.  Hopper resisted arrest and hampered law enforcement’s efforts to get him safely out of the apartment that was now filled with smoke.  Law enforcement was able to take Hopper into custody, put the fire out with their extinguishers, and help evacuate the apartment building to ensure no one else was injured.

Hopper was treated at the scene by Lincoln Fire and Rescue and subsequently transported to the hospital with smoke inhalation and minor abrasions.  When released, he will be taken to jail on the warrant and faces other charges pending the current investigation.  A Lincoln Fire Inspector will assist in determining the origin of the fire.

In addition to Hopper, several law enforcement members were treated at the scene and transported to the hospital for smoke inhalation and other injuries.  None of the injuries are believed to be life threatening.  The Lancaster County Sheriff’s Office continues to investigate this incident.