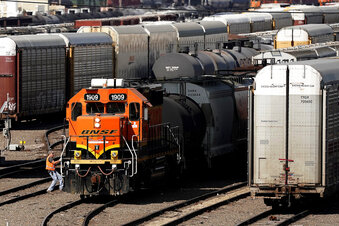 A worker boards a locomotive at a BNSF rail yard Wednesday, Sept. 14, 2022, in Kansas City, Kan. Business and government officials are preparing for a potential nationwide rail strike at the end of this week while talks carry on between the largest U.S. freight railroads and their unions. (AP Photo/Charlie Riedel)

(KFOR NEWS  September 15, 2022)   With the clock ticking down to a Friday strike deadline, a tentative agreement has been reached between the nation s freight railroads and 125,000 of their employees.

Economists and consumer advocates warned of a two-billion-dollar-a-day gut-punch to the nation s economy, should cargo stop moving by rail.

Negotiators from the rail companies and the unions representing their workers met in Labor Secretary Marty Walsh s office to look for some common ground on wages, health benefits and working conditions.  After 20 straight hours of talks, a tentative deal was struck.