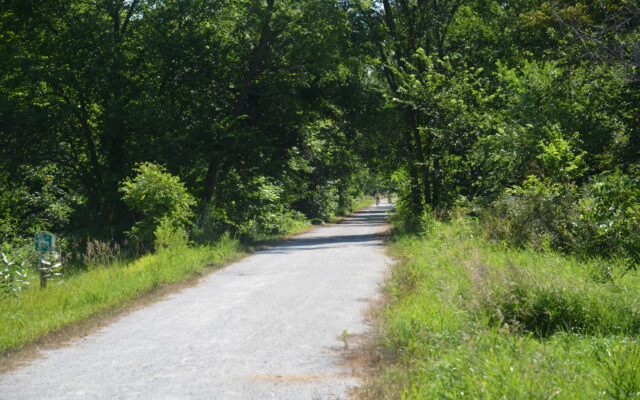 Lincoln (NE) April 27, 2022 – The Lower Platte South Natural Resources District (LPSNRD) has re-opened a one-mile stretch of its Oak Creek Recreational Trail, after a lengthy closing.  Severe streambank erosion was discovered in the trail corridor by LPSNRD staff following an isolated storm in the spring of 2019.  The erosion progressed, until it became necessary to close the portion of trail in August of 2019.  Resources Conservationist Ariana Kennedy said, “The storm eroded an embankment to the edge of the trail surface, making use of the trail hazardous and that mile of the trail was closed.”  The site of the repair project was between county roads 29 and 30, one mile west of the Oak Creek trailhead at Valparaiso.

The Oak Creek Trail is a 13-mile recreational trail that follows a former railroad corridor between Valparaiso and Brainard.  Trail users were encouraged to utilize trailheads at Loma and Brainard during the repair project, which involved re-locating a portion of the main trail, within the original trail corridor.  Kennedy said, “This was an especially challenging repair project and we thank trail users for their patience and cooperation.  The Oak Creek Trail is a popular attraction for both hikers and bikers that offers great rural scenery and we’re happy to have it all open, again.”  Kennedy said a contractor will need to seed the repaired area in May, but any inconvenience to trail users will be minor.