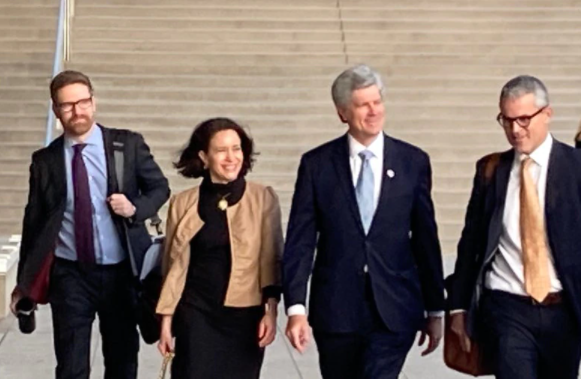 Fortenberry is accused of accepting money from a foreign national for his 2016 campaign and then lying to the FBI in their investigation into foreign donations. Fortenberry is charged with one count of scheming to falsify or conceal material facts and two counts of making a false statement to a government agency. Each felony charge comes with a maximum penalty of five years.

The day began with a pretrial motion where they discussed some evidence that will be introduced during the trial, including text messages between Fortenberry and some of the witnesses as well as interview recordings of him provided by the FBI.

The 12 Californians who will decide Fortenberry’s fate are in the process of being chosen. The pool of jurors were asked about their political affiliation, jobs and history with law enforcement to see if they’d be a good fit the jury.

Media, including 10/11′s Bayley Bischof, are only allowed in an overflow room and not in the courtroom. However, video and audio are not working in that room. We are appealing the denial of access to the courtroom by reporters.

Court documents allege Fortenberry’s campaign received a $30,000 contribution from Nigerian foreign national Gilbert Chagoury, funneled through U.S. citizens, including Toufic Baaklini and someone only identified as Individual H. According to the documents, Baaklini and Individual H hosted a fundraiser for Fortenberry in Los Angeles, where a handful of people donated the $30,000 believed to be from Chagoury under their own names.

The government is accusing Fortenberry of then lying to FBI agents about his knowledge of the contributions in two 2019 interviews, in which Fortenberry “repeatedly and falsely denied knowing about any illegal conduit contributions to his campaign, including after being specifically asked about Individual H and Baaklini.”

Chagoury has admitted to making campaign contributions and accepted a plea deal in 2021.

Fortenberry has pled not guilty, and has said he believes the accusations to be politically motivated. In a video he posted to YouTube when the indictment dropped, he said “They’ve accused me of lying to them and are charging me for this. We’re shocked. We’re stunned. I feel so personally betrayed. I thought we were trying to help and now we will have to fight.”

The U.S. Attorney’s office is expected to call seven witnesses, including Baaklini and Individual H. Alexandra Kendrick, who served as Fortenberry’s campaign fundraising manager in 2016 is also on the witness list. Documents allege she warned Fortenberry that the contributions could be coming from foreign nationals. The trial memo also lists several video and audio recordings of conversations with Fortenberry they plan to introduce.