Trooper hit as NSP responds to dozens of weather-related incidents 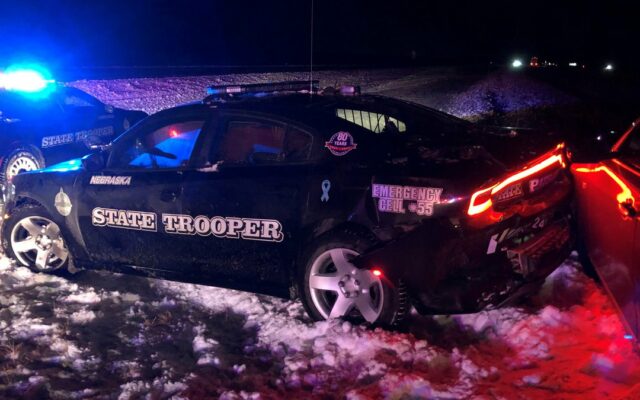 A Nebraska State Trooper was struck and received minor injuries while responding to a motorist assist near Maxwell. (Courtesy: NSP)

NORTH PLATTE, Neb. (Mar. 6, 2022 – KOLN) – A Nebraska State Trooper was struck and received minor injuries while responding to a motorist assist near Maxwell. The incident was among dozens of weather-related incidents handled by troopers Saturday, as much of western Nebraska received snow throughout the day.

At approximately 10:40 p.m., a trooper was parked, with emergency lights on, while responding to a vehicle that had slid off Interstate 80. That vehicle had come to a stop in the median near mile marker 186. As the trooper responded, another vehicle lost control and struck the trooper’s patrol unit from behind.

The trooper was in the patrol unit at the time of the crash and suffered minor injuries. He was able to get out of his vehicle and check on the other driver, as well as the occupant of the vehicle he was previously assisting. That vehicle was not involved in the crash. Both the trooper and the other driver were medically cleared at the scene.