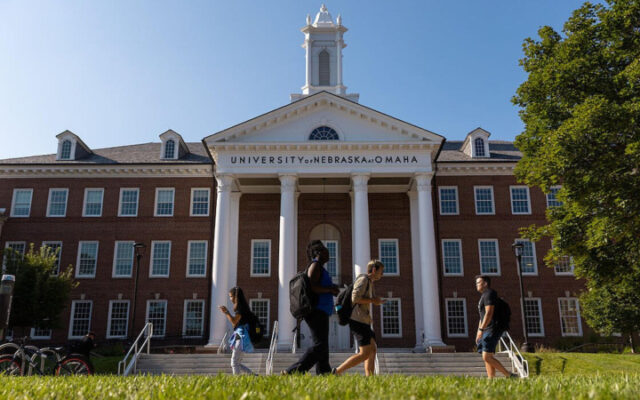 Students walk in front of Arts and Sciences Hall on the University of Nebraska at Omaha (UNO) Dodge campus on the first day of the fall 2022 semester.

(KFOR NEWS  August 25, 2022)   The University of Nebraska at Omaha (UNO) was once again highly ranked as a top employer in Nebraska according to new rankings published today by Forbes and Statista, Inc.

UNO was ranked as the 10th top employer in Nebraska among 25 companies and organizations ranked statewide. This is the second straight year that UNO has been ranked among the top ten employers in the state. Specifically among employers in education, UNO came in at fourth in the state.

“UNO is relentless in carrying out our mission as Nebraska’s urban, metropolitan university to ensure affordable access to world-class education, to engage with our community, and to support our state’s workforce development efforts,” Chancellor Joanne Li, Ph.D., CFA said. “Our faculty and staff work to ensure that UNO is a welcoming, enriching, and inclusive environment for all Mavericks to learn, teach, and work.”

The rankings were identified through an independent survey based on a vast sample of approximately 70,000 Americans working for companies with more than 500 employees in the USA. Across 25 industry sectors, 1,380 employer brands were ranked among the top employers.

The full awards list was announced today, August 24th, 2022 and can be viewed in its entirety on the Forbes website.

The evaluation was based on direct and indirect recommendations from employees who were asked to rate their willingness to recommend their own employers to friends and family. Employees were also asked to evaluate other employers in their respective industry and state that stood out either positively or negatively.