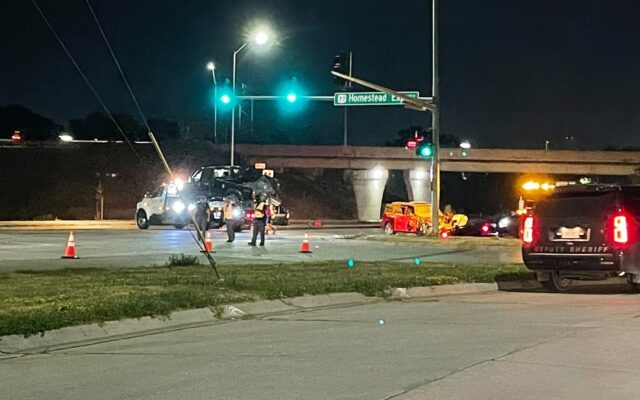 The scene of a two-vehicle crash on West O at the Highway 77 interchange, Monday night.(Ryan Swanigan (KOLN))

(KFOR NEWS  August 2, 2022)   The Nebraska State Patrol is investigating a crash that occurred at approximately 8:30 p.m. Monday at the intersection of Highway 77 and West O street in Lincoln.

NSP had been informed that Seward County Deputies were in pursuit of a Mercedes SUV headed eastbound toward Lincoln.  As troopers were in the West O street westbound turning lane, waiting to turn southbound onto Highway 77, the Mercedes struck a Ford F-350 that was turning southbound onto Highway 77.  The troopers immediately ran to the scene to provide care.  No NSP units were ever in pursuit of the vehicle.

There were three occupants of the Mercedes and one occupant of the F-350.  All four were treated and released at Bryan Health West Campus for minor injuries.  The driver of the Mercedes, which was determined to be stolen, was turned over to the Seward County Sheriff’s Office after release from the hospital.