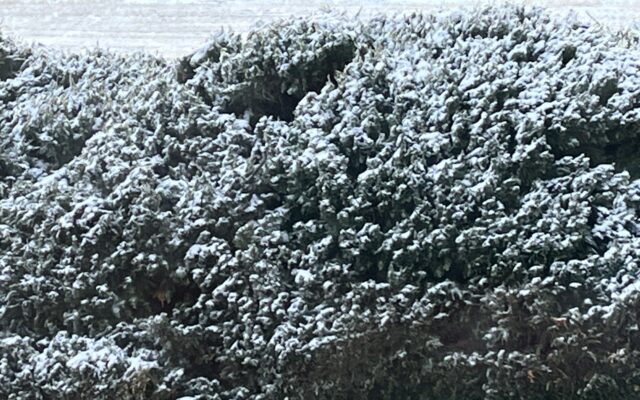 A snow and ice covered bush outside of the KFOR Studios on Thursday morning, Jan. 19, 2023. (Jeff Motz/KFOR News)

LINCOLN–(KFOR Jan. 19)–It may be easy for a lot of people to say that forecasters were way off on their snowfall projections for the Lincoln area on Wednesday.  To be fair, Mother Nature managed to change things up and kept most of the moisture in the form of rain, freezing rain and sleet.

Meteorologist Dirk Petersen at the National Weather Service in Valley tells KFOR News what happened on Wednesday afternoon was what forecasters call a “warm nose”, where warm temperatures in the low levels prevents ice crystals from staying together in the form of snow.  Temperatures were around 33 degrees for most of the afternoon in the Lincoln area, which turned snowflakes into a wet form of snow or sleet.

Officially, 1.2 inches of snow was reported at the Lincoln Airport as of 5am Thursday, but Lincoln set a new record rainfall amount for January 18 with 0.82 inch.  Petersen says when you calculate that amount of rainfall into what it would be for snowfall amounts, it would be about seven inches.

Snow amounts north and west of Lincoln were much higher.  In northeast Nebraska, Norfolk had about nine inches had fallen and eight inches was reported in the Columbus area.  Out west, 10 inches reported in Grand Island and in the central Nebraska town of Merna, near Broken Bow, they measured a snowfall of 23.7 inches.

Interstate 80 and U.S. Highway 30 traffic is closed at Grand Island all the way to the Colorado/Wyoming borders.