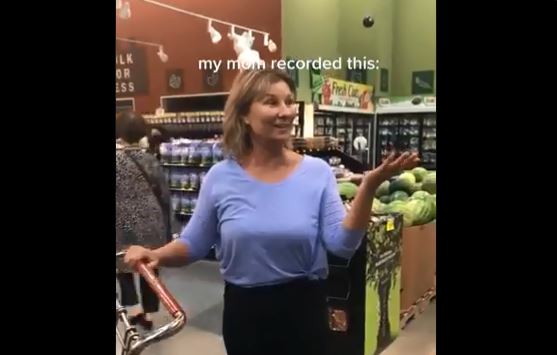 A video capture of the woman who allegedly was coughing on two women inside a Lincoln grocery store sometime over the Labor Day weekend. (Courtesy of @davenewworld_2 on Twitter)

LINCOLN–(KFOR Sept. 8)–A woman videotaped without a mask on and appeared to be coughing deliberately toward two people inside a Lincoln grocery store is trending around the world on social media, with many folks commenting that authorities should cite her for violating the county-wide mask mandate.

KFOR News learned through social media on Tuesday about the video.  The link is below.

COVID-denier in Nebraska coughs on shoppers at a supermarket pic.twitter.com/Ejy9HfsshS

The video indicates that a woman and her daughter were confronted by the woman, who began to cough on them and follow both women throughout the store. An employee of the store was contacted by both women about the woman.

KFOR News reached out to Lincoln Police and they replied that they did not get called on the date of the incident and no one has come forward as a victim.  LPD also said there isn’t an active investigation for this incident and no citations were issued.

There is a mask mandate in Lincoln and Lancaster County that went into effect on August 26 and is set to expire on September 30.