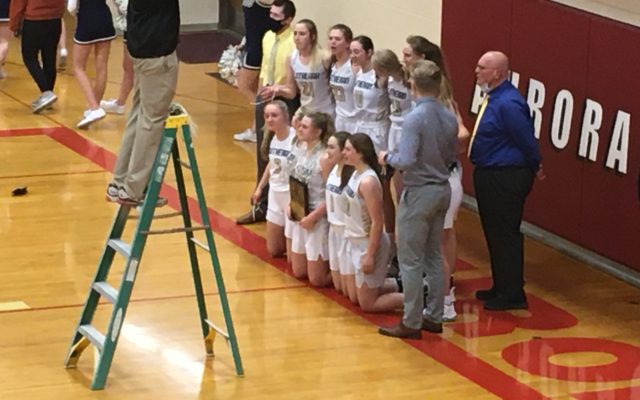 AURORA–(KFOR Feb. 26)–There were no double-digit scoring leaders for the Lincoln Lutheran girls basketball team Friday night, as eight players scored to help the Warriors to a 31-23 victory over Gothenburg to win the Class C1 District 3 championship at Aurora, in a game heard on KFOR.

Lutheran (20-2) had to rely on outside shooting early to take advantage, when Gothenburg started to collapse on the Warriors’ 6-3 junior center Katelynn Oxley.  Sophomore Elsa Meyer proved to be the difference, as she hit two, three-pointers during a 10-0 run in the second quarter for Lutheran, while the Swedes remained scoreless for nearly seven minutes.  The Warriors led 18-9 at halftime.

Lutheran led 23-9 early in the third quarter, before Gothenburg surged back heading into the fourth quarter.  Aubrey O’Hare hit a three-pointer and Clara Evert hit a basket that pulled the Swedes to within five, 28-23, with less than two minutes to play before Lutheran hit three free-throws to seal the win.