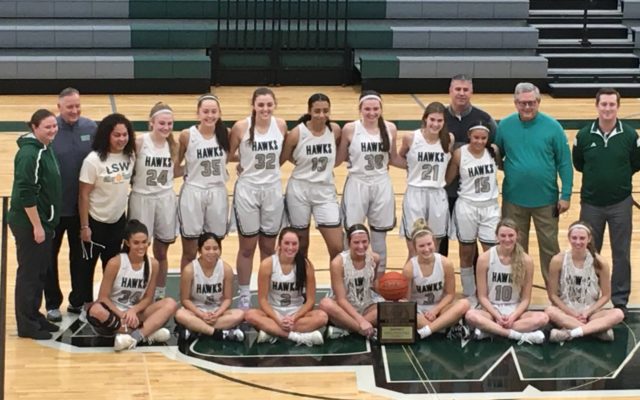 Lincoln Southwest team photo after their 58-35 victory over Norfolk to win the A-3 District Title on Thursday, Feb. 25, 2021. (Jeff Motz/KFOR Sports)

LINCOLN–(KLMS Feb. 25)–Lincoln Southwest’s defense outweighed the slow start offensively Thursday night, by forcing 22 turnovers while on their way to a 58-35 girls basketball victory over Norfolk to win the A-3 district championship.

The Silver Hawks (19-2) have now won 15-straight games and have qualified for the NSAA Girls State Basketball tournament for a fifth-straight year.  Southwest may end up as a No. 4 seed and play Tuesday at 4pm inside Pinnacle Bank Arena, but official pairings will be released on Saturday morning.

Southwest utilized a full-court press on Norfolk early, which gave the Silver Hawks a 13-2 lead going into the second quarter.  Freshman Kennadi Williams scored eight of her game-high 15 points in the first half for Southwest.  The Silver Hawks were up 17-3 midway through the second quarter, when Brinly Christensen and Williams hit back-to-back three-pointers to put the game out of reach.

Norfolk (11-11) managed to turn up intensity to start the second half, but Southwest weathered the short-lived storm and had a 43-20 advantage heading into the final quarter.

Hailey Kleinschmit led the Panthers in the loss with 10 points.