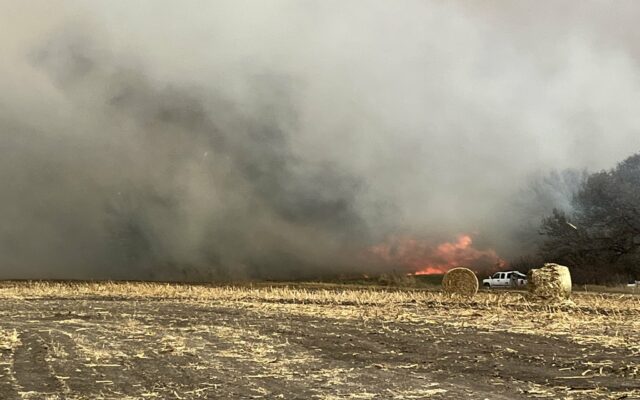 The scene at one of Sunday afternoon's grass fires in southern Lancaster County. (Dale Johnson/KFOR News)

LINCOLN–(KFOR Oct. 27)–The Lancaster County Sheriff’s Office says a fire late Wednesday night northeast of Kramer is being blamed on a rekindle of a grass fire from Sunday afternoon in the same general area.

Sheriff’s Captain Tommy Trotter on Thursday morning said that firefighters from Hallam were called to the scene near SW 100th and West Princeton Road, where a three-sided barn was fully involved in flames.  Inside were a grain wagon and a pile of lumber.  The total damage amount is around $12,600.

Trotter said no one was hurt and there have been calls area fire departments due to rekindling happening within in the burned areas of the two large fires.

For now, the general public is strongly encouraged to not go into those locations.