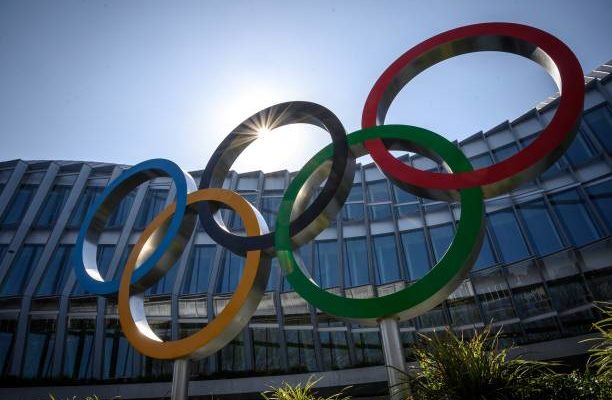 The Olympic Rings logo is pictured in front of the headquarters of the International Olympic Committee (IOC) in Lausanne on March 18, 2020, as doubts increase over whether Tokyo can safely host the summer Games amid the spread of the COVID-19. - Olympic chiefs acknowledged on March 18, 2020 there was no "ideal" solution to staging the Tokyo Olympics amid a backlash from athletes as the deadly coronavirus pandemic swept the globe. The Tokyo Olympics are scheduled to run between July 24 and August 9, 2020. (Photo by Fabrice COFFRINI / AFP) (Photo by FABRICE COFFRINI/AFP via Getty Images)

(KFOR NEWS  July 21, 2021)   The University of Nebraska will have seven athletes representing four countries at the 2020 Tokyo Olympics. The group includes a pair of current Nebraska student-athletes as well as five former Huskers.

Four Huskers will represent the United States in Tokyo. Jordan Larson, Kelsey Robinson and Justine Wong-Orantes make up one-quarter of the USA women’s volleyball team, while former Husker runner Amber (Parkinson) Neben is a member of the road cycling team.

Four-time All-American Sarah Pavan will compete in beach volleyball for her home country of Canada. Beatriz Padron, an incoming freshman, will swim in the 200-meter freestyle for Costa Rica, the country’s lone female swimmer in Tokyo. Keisei Tominaga, an incoming sophomore guard for the Nebraska men’s basketball team, will represent the host country Japan in 3-on-3 basketball.

Neben, Larson, Pavan and Robinson are all repeat Olympians, while Padron, Tominaga and Wong-Orantes are first-time Olympians. Neben and Larson are both competing in their third Olympics, while Pavan and Robinson are making their second Olympic appearances. Additionally, former Husker Taylor Edwards was named an alternate for the United States softball team while incoming freshman gymnast Emma Spence was an alternate for Team Canada.

Several Huskers have strong shots at earning medals in Tokyo. The United States women’s volleyball team won its third straight FIVB Volleyball Nations League title last month and is the No. 1-ranked team in the world. The Americans have medaled in each of the past three Olympics but have never won a gold medal in women’s volleyball. On the beach, Pavan and her teammate Melissa Humana-Paredes were the 2019 world champions and are No. 1 in the FIVB Olympic Ranking for women’s beach volleyball.

The Huskers’ Olympic schedule begins with women’s beach volleyball on July 23. Team USA volleyball begins play on July 24, the same day that the 3-on-3 men’s basketball competition begins and the women’s road cycling race is held. The heats of the women’s 200-meter freestyle swim are on Monday, July 26. Fans can follow the progress of the Huskers in Tokyo by visiting huskers.com/olympics.