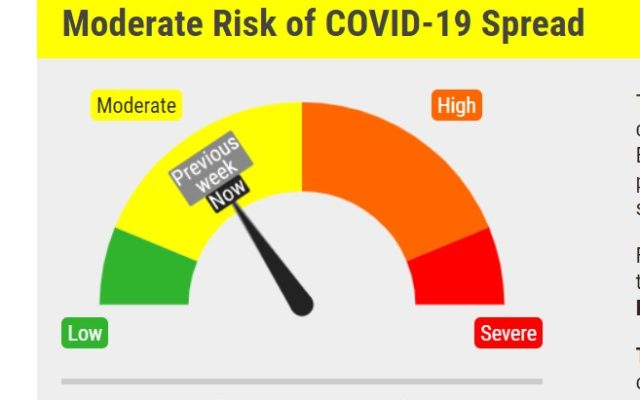 Lincoln, NE (February 23, 2021) Two more deaths were reported in Lincoln from Covid-19 today, pushing the total to 219 since the Pandemic began.  Lancaster County has had 27,892 reported cases of the virus in the past year.  Mayor Leirion Gaylor Baird and Health Director Pat Lopez announced that the Covid-19 Risk Dial will remain in the yellow category for the coming week, indicating a continued moderate risk of spread.

In her weekly briefing, the Mayor continued to praise Lincoln businesses and individuals for following the safety rules that have been thoroughly discussed throughout the past year.  “Lincoln has the lowest rate of cases among all of the State’s major cities.”

Health Director Pat Lopez said 71,000 doses of the vaccine have been administered so far in Lancaster County.  She said the County has been able to receive its full anticipated supply in the past week despite the weather.  She said  that, in the past week, two large clinics were able to vaccinate 7,700 individuals in the Pinnacle Bank Arena, and another smaller clinic at Bryan Health was able to vaccinate another 1,100.

“It’s encouraging to see so many eyes smiling as they receive the vaccine” said Lopez.  “We hope the acceptance rate of the vaccine will remain high.”

Lopez said the County will receive nearly 6,000 doses of the vaccine this week, the largest single week’s shipment so far.  One large clinic for first doses will be held tomorrow, followed by two more second dose clinics.

Lopez said other clinics will be held at Speedway Village, starting next week

Flags To Fly At Half-Staff To Honor Coronavirus Victims