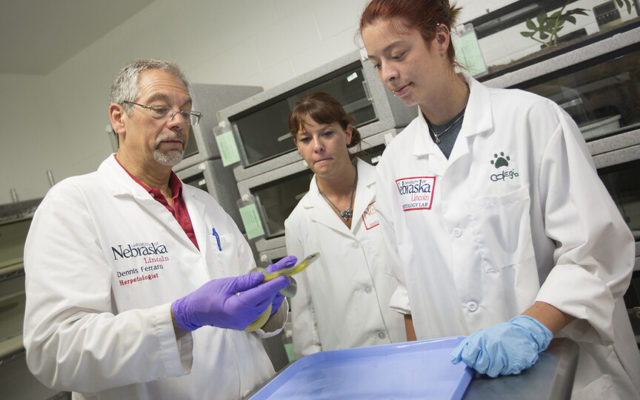 Dennis Ferraro (left), professor of practice in Nebraska’s School of Natural Resources, has won the 2021 Conservation Education Award from The Wildlife Society.

Lincoln, Nebraska (July 27, 2021) — Since becoming a University of Nebraska–Lincoln faculty member in 1990, School of Natural Resources herpetologist and Professor of Practice Dennis Ferraro has advocated for the conservation of reptiles and amphibians. His impact on conservation education for Husker students and Nebraskans alike has been enormous, said the school’s director, John Carroll. This month, Ferraro’s efforts to support conservation were recognized by The Wildlife Society.

The international organization, which addresses issues that affect the current and future status of wildlife in North America and throughout the world, has named Ferraro its 2021 Conservation Education Award winner.

“We are very excited that Dennis received this prestigious national award for his educational efforts,” Carroll said. “Dennis exemplifies a passion for his work and his students. There is no better advocate for reptiles and amphibians in the state of Nebraska.”

“He accomplishes this through his teaching and mentoring of students at UNL through a wide range of courses, including field courses at Cedar Point Biological Station and in Puerto Rico,” Carroll said. “Dennis is especially engaged with mentoring our undergraduates in research and other creative activities, which contributes to herpetofauna conservation and biology and training of our students to be biologists. He has mentored numerous students through the Undergraduate Creative Activity and Research Experience and the Cabela’s Apprenticeship programs.”

Ferraro said teaching students has been a lifelong honor.

“I don’t consider it a job; I consider it my life,” he said. “While this is a great recognition, seeing the students I taught going forward and being successful is, to me, what makes teaching worthwhile.”

In addition to mentoring Husker students, Ferraro has spent more than a decade stewarding the Nebraska Master Naturalist Program. The program has trained hundreds of volunteers to become Certified Master Naturalists who have participated in more than 6,000 projects across Nebraska designed to restore native habitats, prevent waterway degradation, improve waste management and support conservation of at-risk species. The program has received more than $700,000 in grants in its 11-year history and recently received a $71,000 grant from the Nebraska Environmental Trust.

“Dennis has dedicated his life to serving conservation education in Nebraska, and his impact here has been immeasurable,” Carroll said.