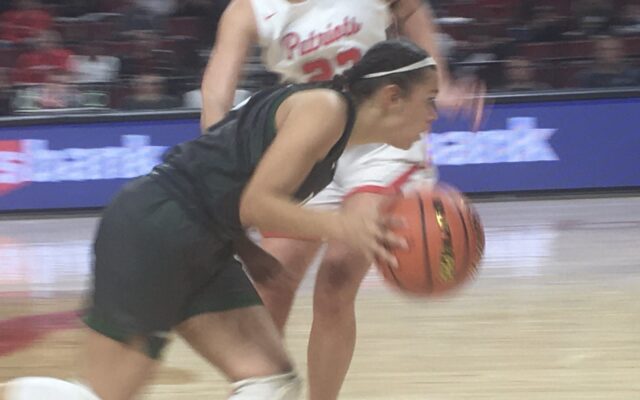 LINCOLN–(KFOR Mar. 9)–Anything can happen at the NSAA State Basketball Tournament.  Not even perfect records can be protected.

Lincoln Southwest pulled off one of the biggest upsets of the tournament Wednesday night, by defeating previously undefeated and top-ranked Millard South 53-46 in the Class A girls semifinals at Pinnacle Bank Arena, in a game heard on KFOR.

The Silver Hawks (21-5) advance to the Class A girls state basketball championship against Fremont, which you can hear on KFOR Friday at 6pm from PBA.  The Tigers defeated Lincoln High in the other Class A semifinal Wednesday, with a recap of that game you can find toward the bottom of the article.

Southwest’s defense provided difficulty for Millard South from the beginning of the game, while offensively the Silver Hawks found a way to score and put players like Patriot guard Cora Olsen in foul trouble the entire game.  While Southwest’s defensive intensity was cranked up, Millard South at times got going behind junior Khloe Lemon.  The 5-11 forward scored a game-high 22 points and helped pull the Patriots as close as four points with two minutes remaining in the game.

Kennadi Williams, Southwest’s sophomore guard, helped late by sinking free-throws to extend the lead back to seven and seal the victory for the Silver Hawks, giving Millard South their first loss in 28 games.  Williams led Southwest with 19 points, eight of her second half points were from the free-throw line.

The Silver Hawks got rolling early in the game, by jumping out to a 17-8 first quarter lead and led at halftime 30-17, after Taryn Ling banked in a three-pointer with two seconds left in the second quarter.

Fremont overcame a hot start from Lincoln High and turned a one-point first quarter deficit into 25-22 halftime lead, largely in part to an 8-0 run early in the second quarter.

The Tigers took advantage of missed shots and outscored the Links 22-10 in the third quarter and had a 47-32 lead entering the final quarter.  Iowa recruit Taylor McCabe scored a game-high 24 points, while Bella Keaton added 15 points in the victory for Fremont.

J’unti Franklin scored a team-high 15 points for Lincoln High (22-3), while Kiana Wiley scored 11 points off the bench and Briauna Robinson added 10 in the loss for the Links.