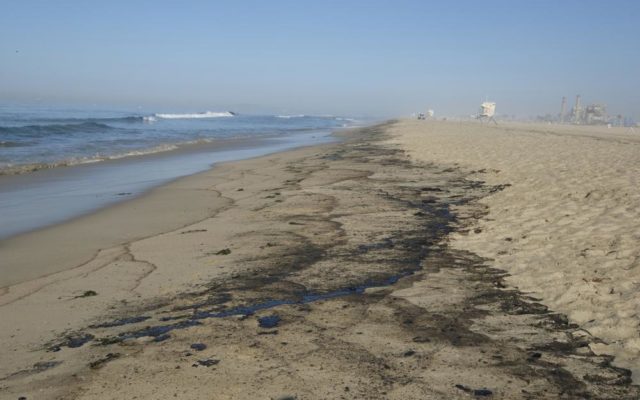 Oil washed up on Huntington Beach, Calif., on Sunday., Oct. 3, 2021. A major oil spill off the coast of Southern California fouled popular beaches and killed wildlife while crews scrambled Sunday, to contain the crude before it spread further into protected wetlands. (AP Photo/Ringo H.W. Chiu)

At least 126,000 gallons (98,420 liters) of oil spilled into the waters off Orange County, according to a statement from the city of Huntington Beach.

“The spill has significantly affected Huntington Beach, with substantial ecological impacts occurring at the beach and at the Huntington Beach Wetlands,” the statement said.

The oil created a miles-wide sheen in the ocean and washed ashore in sticky, black globules along with dead birds and fish. Crews led by the U.S. Coast Guard deployed skimmers and floating barriers known as booms to try to stop further incursion into the wetlands and the Bolsa Chica Ecological Reserve.

Foley said Newport Beach Mayor Brad Avery told her that he encountered the oil slick while in a boat traveling back to the mainland from Santa Catalina Island. “He saw dolphins swimming thru the oil,” Foley tweeted.

The Huntington Beach statement early Sunday said “while the leak has not been completely stopped, preliminary patching has been completed to repair the oil spill site,” with additional repairs planned.