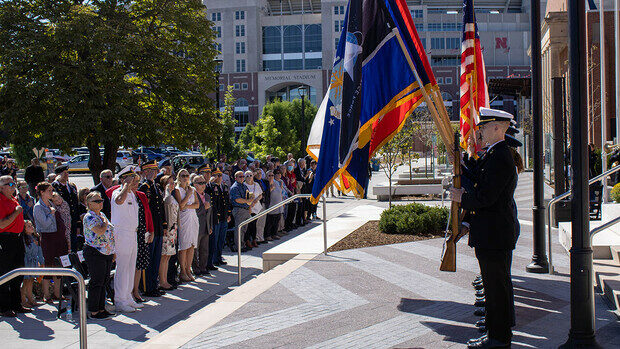 (KFOR NEWS  September 12, 2022)   The University of Nebraska–Lincoln dedicated its Veterans’ Tribute during a Sept. 11 ceremony at the Pershing Military and Naval Science Building.

Funded through private donations, the Veterans’ Tribute project offers a reflection area along Vine Street, from the steps of the Pershing Military and Naval Science Building to the iconic Coliseum. The $3.75 million project is part of an ongoing, multi-phase upgrade of the mall immediately east of Memorial Stadium. The upgrade further complements Memorial Mall and Memorial Stadium, both also built in honor of veterans.

“This unique space in the heart of our campus is an opportunity to honor all veterans, members of the military and their families,” Chancellor Ronnie Green said. “It is a beautiful and significant tribute to those willing to sacrifice something larger than themselves — a space where we can all pause and reflect on how different our lives may have been if not for the courage of a few willing to serve in our military.”

The project design, inspired by the American Veterans Disabled for Life Memorial in Washington, D.C., features 20 glass panels with quotes that depict moments in the lives of veterans, service members and their family members. It also includes a redesign for the entrance of the university’s historic Pershing Military and Naval Science Building.

“The project design is military neutral, without specific names of service branches or individuals who have served,” said Michelle Waite, assistant to the chancellor for government and military relations. “It treats military branches as one family, indicating that military service is universal, and illustrates the many multiple positive attributes of serving in the military.”

A Veterans’ Tribute design committee helped guide development of the project. More than 900 quotes were submitted for consideration by veterans and their family members for inclusion on site panels. All of the submissions — including those not selected for inclusion in the site design — will be held in the University Archives and Special Collections for future reflection and potential publication.

The upgrade to the Pershing Military and Naval Science Building entrance reconfigures steps and concrete to create a chevron-like pattern.  The steps also include individual words selected by the design committee regarding “what it means to serve.” Many of those same words have been carried over as themes to the panels that incorporate the quotes.

The tribute also features a new Veterans’ Tribute Flag Plaza, made possible by the generous donation of the Fred and Sally Bekins Foundation.

And, the overall space includes trees, seating and landscaping that creates a serene space to allow for reflection and remembering.

The tribute space will be used for education, reflection, rest and study. It will also be a highly trafficked space as fans approach Memorial Stadium — which itself was built to honor veterans — on Husker football game days.

“As a veteran, I am particularly pleased that the University of Nebraska–Lincoln continues to enhance its focus on military service,” said Maj. Gen. Daryl Bohac, adjutant general of the Nebraska National Guard and Husker alumnus. “In this space, all can come and reflect on their own service and the service of others. It is also a place to learn, to pause and give thanks in whatever form that might take.”

The project was developed to complement the addition of plaques honoring students of the university who served in World War I, the most famous being John J. Pershing. The plaques were added to the interior of Memorial Stadium, at Gate 20, and unveiled during a 2018 celebration of the 100th anniversary of Armistice Day.