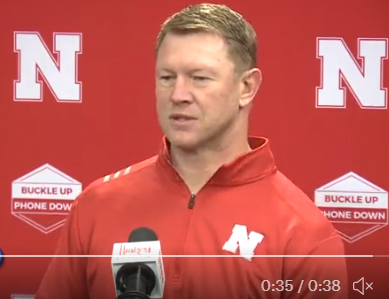 LINCOLN–(KFOR Sept. 11)–Word out early Sunday afternoon is that Nebraska head football coach Scott Frost has been let go from his position, effective immediately, in a statement sent out by Nebraska Athletic Director Trev Alberts via the Nebraska Sports Information Office.

“Earlier today I met with Coach Frost and informed him we were making a change in the leadership of our football program, effective immediately. Scott has poured his heart and soul into the Nebraska football program both as a quarterback and head coach, and I appreciate his work and dedication.

“After the disappointing start to our season, I decided the best path forward for our program was to make a change in our head coaching position. Associate Head Coach Mickey Joseph will serve as our interim head coach for the remainder of the 2022 season.”

Alberts later met with the media Sunday afternoon discussing the situation with the program and the decision to dismiss Frost.

“I think we owed it to the players, we owed it to our fans to give these players an opportunity these last nine games,” Alberts said.  He also added he would like to see Joseph grow into being a coaching candidate.

“We’ll just see where it (the season) goes,” Alberts added.

Frost’s dismissal comes after Nebraska suffered a 45-42 loss to Georgia Southern as a three-touchdown favorite at home on Saturday night. The situation was so dire that Alberts made the move only three weeks before Frost’s contract buyout would have been cut in half from $15 million to $7.5 million on Oct. 1.  Alberts says there’s no negotiated settlement.

“The University of Nebraska has a long history of living up to what we’ve agreed to,” Alberts said. “The contract is what the contract is.  Of course, the university will comply, as we always do.”

Frost was 16-31 three games into his fifth season.  Alberts says if any other changes are made in the program this season, that decision will be done by Joseph.