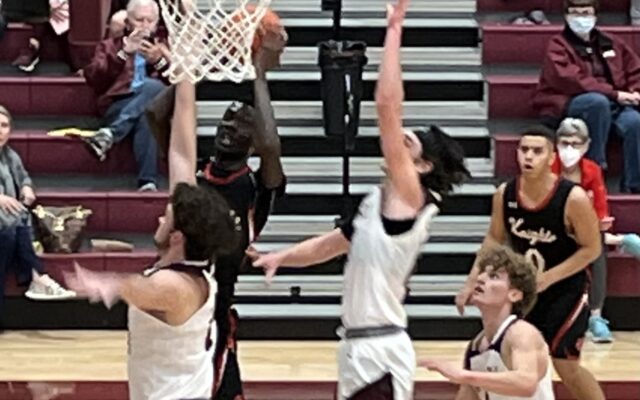 WAVERLY–(KLMS Jan. 11)–It took only 45 seconds into the game for AJ Heffelfinger to connect on the first of his five made three-point shots on Tuesday night.

The 6-0 junior guard scored a game-high 24 points to lead the Class B No. 4 rated Waverly boys basketball team to a 59-35 victory over Elkhorn Mt. Michael at the Waverly Gym in a game heard on KLMS ESPN Lincoln FM101.5/1480AM.

But Heffelfinger didn’t score the rest of the quarter, as Riley Marsh, Preston Harms and Cole Murray scored from close range and Landon Tjaden hit a three-pointer to give the Vikings a 12-0 lead, before the Knights finally answered with a three-pointer from forward/center Kuon Kuon with 50 seconds left. Waverly then outscored Mt. Michael 19-6 in the second quarter, sparked by Preston Harms three-pointer, plus a pair of threes and two free-throws from Heffelfinger to boost the Viking lead to 31-9 at halftime.

The Vikings (9-3) led 47-27 to begin the fourth quarter and put the game away when Riley Marsh banked in a three-pointer as part of his 11-point effort. Tjaden added 10 points in the win for Waverly.

Listen back to the game by clicking the links below.