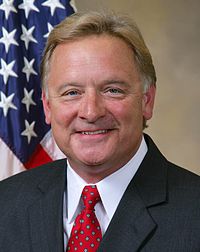 Krist was a Republican for most of his time in the nonpartisan Legislature, but left the GOP shortly before he announced his gubernatorial bid. He initially launched his campaign as an independent, but re-registered as a Democrat because of the difficulties nonpartisan candidates face in qualifying for the ballot. He lost to Republican Gov. Pete Ricketts in 2018.