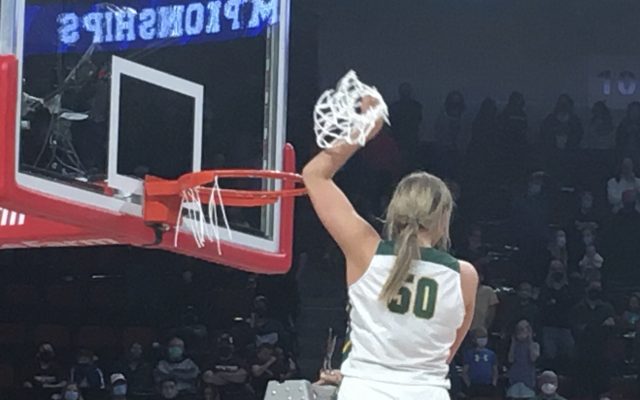 LINCOLN–(KFOR Mar. 6)–It’s all too familiar to the Lincoln Pius X girls basketball team, cutting down the nets and walking away with the gold.

The Thunderbolts did it a year ago against Lincoln East and Saturday night, they achieved something only a few teams in Class A have done since the inception of the NSAA Girls State Basketball Tournament in 1977–go undefeated.

Pius X got 27 points and 19 rebounds from Nebraska recruit Alexis Markowski to help overcome hot-shooting from Fremont early and defeat the Tigers 56-52 to win the Class A title at Pinnacle Bank Arena, in a game heard on KFOR.

The championship is the fifth in the program’s history and second back-to-back run for the Thunderbolts since they won Class B titles in 1991 and 1992. It also marked Class A’s first repeat champion in 11 years and first undefeated title holder since Lincoln Northeast in 2005.

But early in the game Saturday night, Pius X’s chances to repeat were in jeopardy.

Senior guard Jillian Aschoff sparked a surge in the second quarter, which included her hitting a three-pointer to give the Thunderbolts a one-point lead, before Fremont responded with a 6-0 run to take a 29-24 halftime lead.  Aschoff added 10 points in the victory.

Pius X then took control in the second half, when Markowski scored 13 points in the third quarter alone that helped the ‘Bolts to a 43-37 lead. It grew as much as eight points, before Fremont narrowed the deficit in the fourth quarter when Macy Bryant scored a basket and the Tigers trailed 52-49 with under a minute to play.

Fremont was led by junior guard and Iowa recruit Taylor McCabe with 18 points, while Charli Earth finished with 11 in the loss for the Tigers.