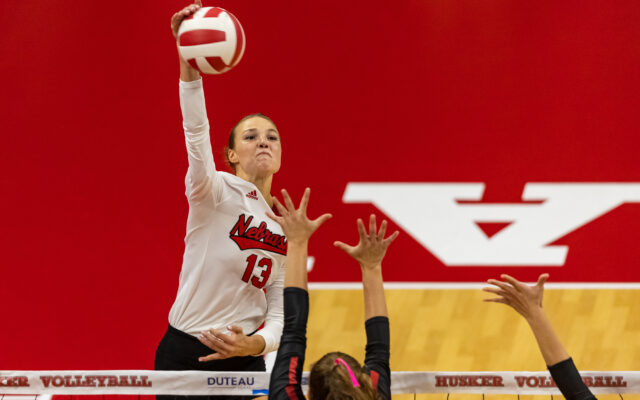 The Huskers fell to 7-1, while Stanford improved to 5-2 on the season.

Madi Kubik headlined Nebraska’s efforts, producing team highs in both kills with 13 (.231) and digs, tallying 15. Whitney Lauenstein added 11 kills of her own with seven digs and three blocks and two aces, and Lindsay Krause chipped in nine kills with two blocks.

Nicklin Hames had a team-high 19 assists, while Anni Evans put up 12. On the defensive end, Lexi Rodriguez and Evans joined Kubik in double figures for digs, with 13 and 12, respectively. Bekka Allick and Kaitlyn Hord powered the block game, with five apiece. Both players also had five kills. Maggie Mendelson had four blocks to go with a career-high six kills.

The teams remained in step in both digs and blocks. Nebraska recorded 68 digs to Stanford’s 64, while the Huskers had 10.5 blocks to the Cardinal’s 10.

Set 1: Nebraska separated from a 6-6 tie with a 5-1 run to go up 11-7. Hord had three kills in that stretch, and Knuckles served an ace. The Huskers continued to lead by four at the media timeout, 15-11, with Kubik pounding two more kills and Knuckles adding one. Mendelson posted a kill to make it 16-11, and a triple block by Hord, Mendelson and Kubik put the Huskers up 18-12. After a timeout, the Cardinal scored three in a row to slice the deficit in half, 18-15. Mendelson added a kill that made it 19-15, but Stanford scored the next three to get within 19-18. Lauenstein put down back-to-back kills for a 21-18 lead, and Lauenstein kept NU on top with her fifth kill that made it 22-20. Clinging to a one-point lead at 22-21, the Huskers benefited from Stanford’s sixth service error of the set that made it 23-21. but Stanford got kills from Francis and Baird to tie the set at 23-23, and Nebraska took a timeout. A Stanford ace out of the timeout gave them set point at 24-23, but a block by Allick kept the Huskers alive at 24-24. Stanford earned another set point but served long. The Huskers followed by serving long as well for Stanford’s third set point, and a Husker hitting error gave the Cardinal the 27-25 win. Stanford hit .283 in the first set to .214 for the Huskers.

Set 2: Stanford scored the first three points and maintained an early advantage. Two kills and a block by Mendelson kept the Huskers within two, 9-7, and a block by Hord and Lauenstein cut it to one, 10-9. The Big Red drew even at 11-11 after Lauenstein smashed an overpass of a Rodriguez serve. But Stanford regained a 15-13 lead at the media timeout. Allick and Hord produced kills to get within one, 16-15, but the next three points went to the Cardinal as they led 19-15. The Huskers fought back with kills by Krause and Kubik around a Stanford hitting error to cut it to 19-18. Francis sided out for Stanford, but two Cardinal hitting errors tied the score at 20-20. But Stanford scored four of the next five rallies to earn set point at 24-21. Lauenstein sided out, but Stanford won 25-22 after another Husker error. Stanford hit .139 in set two, while the Huskers hit -.025.

Set 3: Stanford jumped in front and led 13-10 after a service ace. The Huskers answered in a big way with kills by Mendelson, Krause and Allick as part of a 5-0 run that made it 15-13 Huskers. With the score tied at 18-18, Kubik earned a sideout for NU and Stanford committed a hitting error for a 20-18 Husker advantage. Kennedi Orr subbed into the match and set Lauenstein for a kill that made it 21-18. Kipp sided out for Stanford, and Kubik tipped a kill that made it 22-19. Allick and Hord stuffed a Cardinal attack for a 23-19 lead, and Lauenstein served back-to-back aces for a 25-19 win. NU hit .235 and held Stanford to .111.

Set 4: Nebraska held a 7-5 lead after three kills by Kubik, but Stanford came back with a 4-1 run to go up 9-8. Stanford held a 13-11 lead when Allick recorded back-to-back kills to tie the score, but the Cardinal went into the media timeout with a 15-13 advantage. The Huskers rallied to tie the set at 17-17, and NU took a 21-20 lead on a block by Orr and Allick. The Cardinal answered with back-to-back points to go up 22-21 before a kill by Kubik tied it. Kipp and Krause traded kills before Baird gave Stanford match point, 24-23. After a timeout, Krause posted back-to-back kills for a Nebraska set point at 25-24, and Stanford called timeout. Kipp tipped a kill for a sideout, and Rubin followed with another for another Stanford match point, 26-25. Kipp posted the final kill for a 27-25 win.

Up Next: The Huskers will leave the state for the first time this season when they head to Lexington, Ky., to face No. 13 Kentucky on Sunday at 2 p.m. (CT).