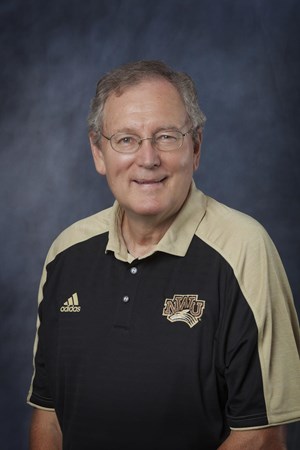 LINCOLN–(NWU Athletics May 22)– For over the past decade, only one man has seen nearly every Nebraska Wesleyan University football and men’s basketball game.  That man behind the headset is turning in his gear and will no longer be wearing the gold & black in prime seats at stadiums and arenas.

After 11 years as the “Voice of the Prairie Wolves” longtime broadcaster Dick Janda announced this month his plans to retire and step away from the microphone after a storied career in television and radio in Lincoln and the state of Nebraska.

Janda called over 100 NWU football games and nearly 300 Prairie Wolves basketball games on KFOR Radio.  He also did play-by-play broadcasts of NWU volleyball and women’s basketball on the internet during video webcasts.  He got his start at NWU serving as the Sports Information Director in the late 1970s before moving on to a successful career on local Lincoln TV and radio stations.

“NWU athletics is sports in its purest form, played strictly for the love of the game and there is special satisfaction in describing that type of competition,” Janda remarked.

Although he never actually put on a Prairie Wolves uniform, it was like Janda was part of the football and men’s basketball programs.  Dick could be seen in the Abel Stadium press box or high atop the bleachers in Snyder Arena.  He traveled on the bus with the team, ate pregame meals with players and coaches and stayed in the team hotel on the road.

Basketball coach Dale Wellman got to spend numerous road trips with Janda over the past six seasons.  They became dinner partners sharing the 2 for 20 specials at Applebee’s and Wellman was exposed to one of Janda’s favorite pregame foods.  “I always wondered why Hy-Vee salad bars had pickled herring on them, then I ate with Dick and noticed that he’s a big fan.”

It wasn’t always about sports with Janda’s broadcast.  Wellman shared how Dick would research a city that NWU hadn’t played in before then he would share that history during the pregame meal so Wellman could get a preview of what listeners would hear later on.  He also used his workout routine on the road to explore new places and tweet out his adventures.  “On the road, no matter how cold or how many inches of snow there was on the ground, you could bet your bottom dollar that Dick left the hotel, walked a couple of miles and returned before I even woke up,” Wellman recalled.

Many fans would tune in to Janda’s broadcast not only to get perspective and insight on the game, but to hear his famous sayings and listen to nicknames he’d give to NWU players.  “Tickles the twine”, “nestles the net” or “coast to coast like butter on toast” were some of his go-to sayings.  The first score always brought “Draws first blood, breaks the ice and dents the scoreboard”, then if the score hit ‘9-5’ listeners were sure to hear a clip of Dolly Parton.  When NWU got rolling and made an amazing play, his most exciting call of ‘Holy Pepperoni” came over the air.

Besides broadcasting the games, Janda has several other memories that stick out in his mind.  From having his broadcast equipment covered in snow trying to setup outside at Dana College football stadium, to traveling with the basketball team to Washington D.C. for an educational and noteworthy trip he experienced it all.

“After finishing the 2012 NWU football season winning at Hastings College, a Husker football radio broadcast was on the bus during the trip back home.  The announcers mentioned NWU’s win and I’ll always remember the cheer that erupted.  Also, the long bus ride back to Lincoln after NWU won its first Iowa Conference basketball championship in 2017 was very exciting.”

Thinking back, Janda remembers several exciting games and players that he covered.  The come from behind win over Central College in the 2018 IIAC tournament basketball championship and following All-American Trey Bardsley leading the Prairie Wolves to the 2016 NAIA National Tournament were a couple that stand out.

Janda admits nothing tops calling the 2018 NCAA III National Championship basketball game.  He had never done the play-by-play of any other national championship games but had been part of big events.  In the past he covered Nebraska football on TV and was on the field for the 1984 Orange Bowl national championship game.  He hosted both the Tom Osborne coaches and Bob Devaney Prediction show that featured cameo appearances by Barry Switzer.

“However, broadcasting NWU’s national championship run in 2018 and the title game is the most exciting thing I’ve done in my Radio-TV career.”

Listeners could hear it in his voice just how special that moment was.  That feeling was especially evident to men’s basketball coach Dale Wellman.

“I was in a position where I never got to hear Dick call one of our games live, but still my most memorable thing about Dick was when I was able to listen to a replay of him calling the final seconds of our National Championship game.  You could really hear how much it meant to him and how much he cared about NWU.”

Janda is excited about his upcoming retirement where he plans to do some traveling and spend time in Arizona.  Dick and his wife Kathy will spend lots of time with their son and his family in Kansas City because “We love being grandparents”.

Nebraska Wesleyan will no doubt miss all the time and effort that Janda has put into broadcasting games for the Prairie Wolves and the terrific coverage he gives NWU student athletes.  Not only on the radio but his P-Wolf Profiles became a wonderful feature to spotlight NWU athletes in all sports.  It will be hard to replace such a legendary figure of Nebraska media.

In 2017, Janda was inducted into the NWU Athletic Hall of Fame receiving the Spirit of the Plainsman award.  Fittingly, one last special moment occurred at the end of the basketball season when the NWU senior class presented a commemorative basketball signed by all members of the winningest class in school history.

“I have appreciated the opportunity to work with all the coaches and athletic staff at Nebraska Wesleyan,” Janda concluded.  “It made me feel good to be part of the team.”

Nebraska Capitol Quiet As Biden Sworn In As President