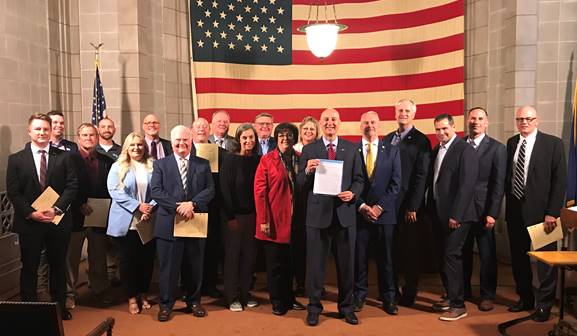 LINCOLN, NE (April 19, 2022) – Today, Governor Pete Ricketts signed LB 1261e during a ceremony at the Nebraska State Capitol.  LB 1261e extends the Nebraska Advantage Rural Development Act, which had been set to expire at the end of 2022.  The bill also expands the Nebraska Advantage Rural Development incentive program to provide ten times the amount of available tax credits annually for eligible investments in rural Nebraska.  The “e” added to LB 1261 means it was signed with the “emergency clause”, placing it into effect immediately.

LB 1261e includes provisions from LB 596 to provide tax credits to fuel retailers selling E15 or higher blends of ethanol.  Retailers can apply to the Nebraska Department of Revenue for a credit of 5 cents on each gallon of E15 sold and 8 cents per gallon of E25 or higher blends sold.

“LB 1261e will help to grow Nebraska agriculture and attract investment in our rural communities,” said Gov. Ricketts.  “The bill also encourages fuel retailers to offer higher ethanol blends.  Increasing the use of ethanol saves drivers money at the pump, cleans up our environment, and creates opportunities for our farmers and ranchers.”