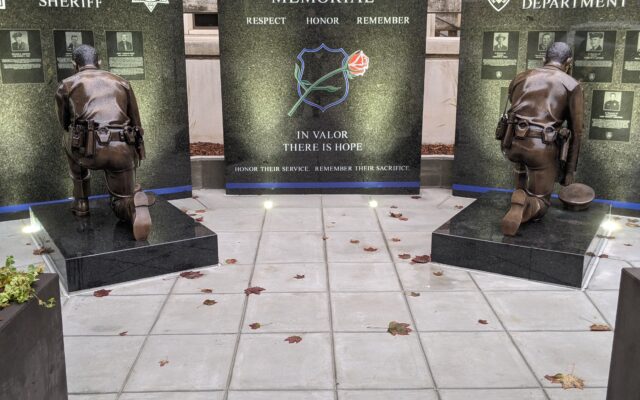 LINCOLN–(KFOR Oct. 24)–Weather prompted the dedication to Lincoln and Lancaster County’s new law enforcement memorial outside the Justice and Law Enforcement Center to move inside to the City Council chambers on Sunday afternoon.  The rain didn’t dampen spirits to honor the 10 officers and deputies who died in the line of duty.

“The memorial outside stands as a visible symbol of our pledge that we will never forget,” Mayor Leirion Gaylor Baird told the gathering of family members, law enforcement and the media Sunday.

Lancaster County Sheriff Terry Wagner said the officers and deputies laid down their lives for the safety of the citizens of Lincoln and Lancaster County.

“This memorial will be a reminder to all citizens that the men and women of the Lancaster County Sheriff’s Office and the Lincoln Police Department are willing to make the ultimate sacrifice to uphold the oath we have all taken,” Sheriff Wagner said.

Lincoln Police Chief Teresa Ewins says the greatest recognition to those fallen officers is by remembering them and their sacrifice.

“This memorial will keep their names alive and remind us that life is precious with no guarantee of tomorrow,” Chief Ewins said.