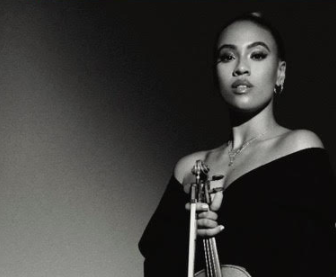 Lincoln, NE (March 29, 2022) Beyoncé’s violinist, Enzima, a Lincoln native and UNL alumna will be performing for Meadowlark Music Festival’s 20th Anniversary Celebration on the evening of April 2nd with Omaha’s celebrated Voices of Victory Gospel Choir in partnership with the Glenn Korff School of Music in Kimball Hall!
The Meadowlark Music Festival has been “bringing a world of music to Nebraska” since 2001. Winner of the Governor’s Arts Award, over the past  several years Meadowlark has presented artists that would normally never visit the state from Italy, Greece, England, France, Germany and more including Isaac Stern International Award winner François Rabbath, multi-GRAMMY winner Howard Levy, Metropolitan Opera star Kitt Reuter Foss, New York Young Artist Competition winner Sybarite 5, and Naumberg Competition winner Anthony Molinaro.
For the 20th Anniversary it will present Lincoln native and now Beyoncé’s violinist and Decca Recording Artist Meredith ‘Ezinma’ Ramsay in concert with Omaha’s GRAMMY-nominated 50 member Voices of Victory Gospel Choir on Saturday April 2nd at 7:30PM in Kimball Hall on the UNL campus.
For more information and tickets (in-person & streaming):
https://meadowlarkmusicfestival.org/
Meredith ‘Ezinma’ Ramsay attended Lincoln Southwest High School and performed with the Lincoln Youth Symphony Orchestra, winning their concerto competition and the Meadowlark-Larsen Young Artist Competition. She attended UNL where she double majored in biochemistry (with an emphasis in pre-medicine) and violin performance. In 2012, she won a scholarship to complete her master’s degree in violin performance at The New School in New York City. While in New York, Ezinma experimented and found her sound. In addition to performing at Carnegie Hall, Lincoln Center, and Symphony Space, she took production classes, studied jazz violin, joined a few bands, and pushed past the limits of the classical genre.

Ezinma catapulted into digital stardom when she began performing covers of viral trap hits on Instagram, including “Mask Off” by Future, “Gucci Gang” by Lil Pump and “Rockstar” by Post Malone. In 2016 She was approached by Beyonce with an offer to be a part of her all-female band. Ezinma accompanied her at the end of her Formation World Tour, the release of “Lemonade,” and in 2018 was part of history when she performed alongside Beyoncé at Coachella.

Ezinma has worked with renowned artists including Stevie Wonder, Kendrick Lamar, Joshua Bell, Yo Yo Ma and Clean Bandit to name a few. As a composer, Ezinma has scored national advertisements, documentaries, short films, and was even part of the “Black Panther” (2018) soundtrack. In 2019, Ezinma signed with Decca Records, US (Universal Music Group).Her new EP, Classical Bae, was just released.

Joining Ezinma will be Omaha’s celebrated Voices of Victory Gospel Choir. Formed in 1951 as the Inspirational Choir, the Voices of Victory are longstanding participants in the Gospel Music Workshop of America and recipients of the Nebraska Governor’s Art Award. They have shared the stage with gospel icons Richard Smallwood and Ricky Dillard, as well as country stars Trace Adkins and Lyle Lovett.  In 1978, when they were known as the Inspirational Choir, the Voices of Victory of the Salem Baptist Church of Omaha, Nebraska, made history when the Reverend James Cleveland recorded them for his James Cleveland Presents series. The resulting Savoy Records double album, I Don’t Feel No Ways Tired, featuring singer and musician Keith Pringle and choir director Doretha Wade-Wilkerson, was nominated for a Grammy Award in 1979. Curtis Burrell’s title track has since become a perennial in the gospel song lexicon.

Delighted by the album’s overwhelming success, Cleveland and the Salem Inspirational Choir went on to record two additional live, in-church albums for Savoy: Victory Shall Be Mine (1980) and He’s Able (1981). At one point in 1981, I Don’t Feel No Ways Tired and Victory Shall Be Mine were on the Billboard Top Gospel Albums chart at the same time.

More than 20 years later the Voices of Victory Mass Choir returned to live recording under the leadership of senior pastor Maurice Watson and minister of music Jay Terrell. Less than a month after the September 11, 2001, terrorist attacks on the United States, the choir recorded They That Wait. Captured live at Salem Baptist, They That Wait features “I Can’t Forget” and “Unconditional Love,” compositions written by celebrated gospel songwriter Pastor Rudolph Stanfield.