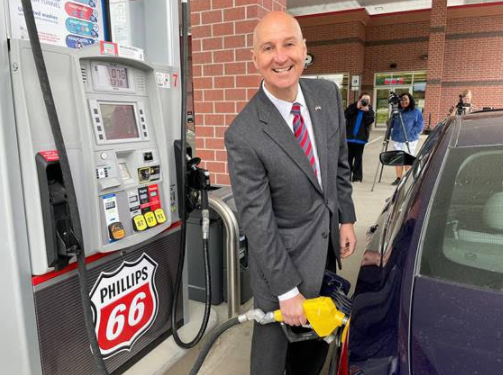 Gov. Ricketts pumps ethanol-blended gas at U-Stop in Lincoln to promote the use of renewable fuels.

LINCOLN, NE (August 3, 2022)  – Governor Pete Ricketts has invited retailers who sell higher ethanol blends of fuel to apply for tax credits made available through the passage of Legislative Bill (LB) 1261e.  Ricketts signed the bill into law this spring after it was passed unanimously by the Nebraska Legislature.

The Nebraska Department of Revenue is administering the program and began applications for the credits on Monday, August 1st.  For more information or to apply, visit ethanol.nebraska.gov/resources/nebraska-higher-blend-tax-credit-act.

“Utilizing ethanol should be a centerpiece of our national strategy to lower gas prices,” said Gov. Ricketts.  “Ethanol saves drivers money at the pump, is better for the environment, and creates opportunities for farm families here in Nebraska.  As a state, we’re doing our part to grow U.S. energy production by encouraging sales of renewable fuel.”

“At the retail level, very simply put, E15 is better fuel and it costs less,” said Randy Gard, chief operating officer of Bosselman Enterprises and secretary of the Nebraska Ethanol Board.  “We are excited about the passage of LB1261e and what it can do for our customers.  If you are a retailer, there is now nothing standing in your way today to make the transition from E10, the standard fuel most people use today, to joining this mass conversion to E15.  There are incentives with LB1261e, there’s consumer demand, there are certainly price pressures, and increased availability at the terminals.  This is a win for everybody…retailers, legislators, farmers and ranchers, and especially users of ethanol who support Nebraska’s economy, help the environment, and save money every time they fill up.”

Bosselman Enterprises, located in Grand Island, was an early adopter of E15 at many of its Pump and Pantry locations across the state.  They continue to see double digit sales growth for E15 every year.

By selling a 10% blend at the pump, fuel retailers are already helping Nebraskans save at least $275 million per year. That savings increases when higher blends are figured in.

“Right now, for some, choosing ethanol is what’s helping them budget for groceries and pay other bills,” said Reid Wagner, administrator of the Nebraska Ethanol Board.  “While there are many other benefits of the fuel, the cost savings are what has motivated the government to make real changes quickly.  The Biden Administration continues to allow E15 to be used throughout the summer, and now, the Nebraska Legislature is rewarding retailers for providing healthier, lower cost fuel options for their constituents.  We know the continued relief ethanol provides economically and environmentally and will continue sharing that message until higher ethanol blends are easily accessible to everyone.”

E15, a blend of gasoline and 15% ethanol, has been declared safe, and approved by the U.S. Environmental Protection Agency, (EPA) to use in vehicles 2001 or newer, light-duty trucks, medium-duty passenger vehicles (SUVs), and all flex-fuel vehicles (FFVs).  Flex fuel vehicles use the highest ethanol blends, up to E85.

To find locations where ethanol is sold, visit fueledbynebraska.com.

Over 96% of the cars, trucks, and SUVs on the road today are legally approved to run on E15.  E15 has both a higher-octane rating and costs less than regular unleaded due to its higher ethanol content.  This gives retailers a lower-priced, higher-octane fuel they can market to consumers.