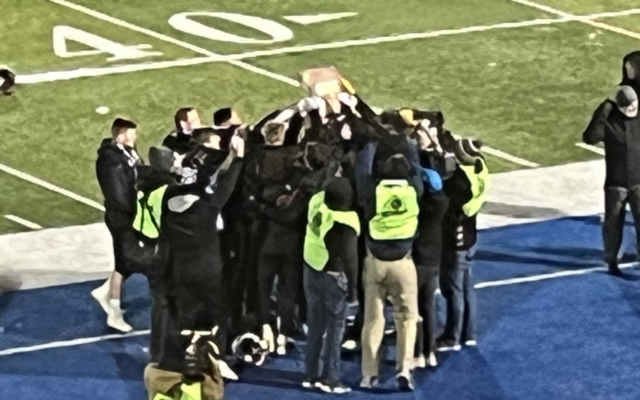 The Patriots won the school’s first state football championship Friday night with a 50-25 victory over Pawnee City in the Class D6 title game at Cope Stadium on the University of Nebraska-Kearney campus.

Parkview Christian (11-1) saw progression from being an eight-man program that was 2-6 in 2019 to teaching the playoffs the past three seasons in the six-man ranks, culminating with Friday’s championship victory.  It also marks the first time a Lincoln school has won a state football title since Lincoln Southeast won the Class A state championship in 2011.

Chandler Page, the Patriots senior running back, ran for 281 yards and two touchdowns and threw for another.  He ran eight times on Parkview’s opening drive, which set up Brayden Bayliss’s two-yard touchdown run for an 8-0 lead.

Pawnee City (9-3) responded on the next drive when quarterback Justin Pierce threw a 45-yard touchdown pass to Andy Maloley to get on the scoreboard.  Page then extended Parkview’s lead to 30-6 right before halftime with a 54-yard touchdown run.

The Patriots further extended the lead with six minutes to play in the third quarter when Colbert threw his second touchdown pass of the night on a 32-yard toss to Ulrich.  Two-and-a-half minutes later, Pawnee City picked up their second touchdown of the night, on a 25-yard run from Maloley.

Parkview Christian’s third touchdown pass of the night came with 1:33 left in the third quarter, when Colbert pitched the ball to Page, who threw a one-yard jump pass to Bayless to extend the lead to 44-12.

Pawnee City responded with ten seconds left before the end of the quarter, when Pierce found Jett Farwell on a 41-yard touchdown pass.

Offensively, Parkview Christian had 397 yards of total offense, 326 of which were on the ground.  Pawnee City had 251 yards of offense, 129 of that from rushing.