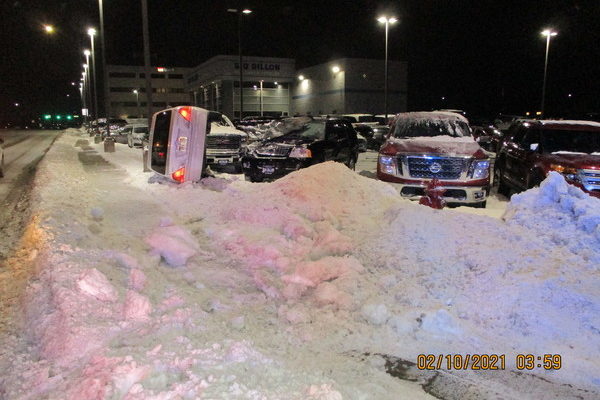 Scene of the crash involving a vehicle that lost control and crashed into the Sid Dillon Car Dealership lot just east of 56th and "O" Street early on Wednesday, Feb. 10, 2021. (Courtesy of Lincoln Police)

LINCOLN–(KFOR Feb. 10)–Police cited a 19-year-old man, after his vehicle rolled and crashed into the lot of an east Lincoln car dealership early Wednesday morning.

Officer Erin Spilker says it was around 2:30am, when police and firefighters were called to the rollover crash in the Sid Dillon dealership lot off of Cotner Boulevard and “O” Street.  First responders found a white Toyota Avalon on its side, after hitting two vehicles.  The Avalon was westbound on O Street when it lost control and hit the curb, causing it to overturn and continue until it hit cars in the car lot.

According to Officer Spilker, the teen wasn’t hurt in the crash and refused any sort of medical treatment.  However, officers said they saw signs of impairment and the man was taken to a treatment center, where they did a formal blood-alcohol content draw.  The teen’s BAC was a 0.156.

Spilker says the man was cited for DUI, minor in possession and negligent driving.