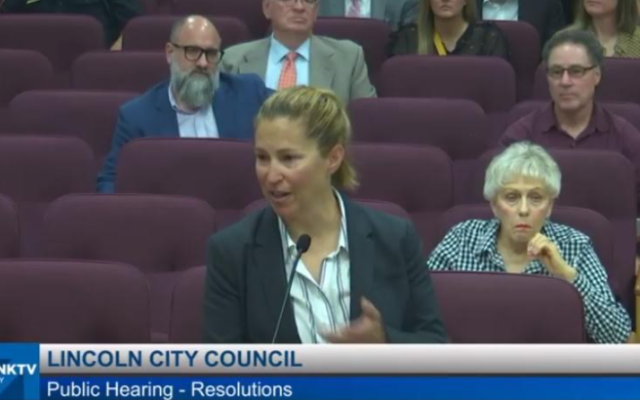 Lincoln, NE (July 19, 2021)  Lincoln has a new permanent police chief. The City Council approved the Mayor’s nomination of Teresa Ewens today. She will take over leadership of the police department at the end of August.

Mayor Leirion Gaylor Baird told the Council that Ewens has the skills and ideas that the public wants to see in their police chief.

“The broad themes that we heard repeatedly include a commitment to Community policing, support for our officers in The Department, a commitment to diversity, equity and inclusion, both in the department and within our community, and an unwavering dedication to transparency and accountabililty.”

The Mayor said Ewens is a strong candidate, and will do a good job in each of those areas.

“I believe Miss Ewens demonstrated a strong commitment to the broad themes that were identified in our search process as priorities for our next Police Chief. and she shares our priority of seeking continuous improvement while celebrating the excellent work of the team at LPD today.”

“We were able to talk with, meet, and engage with some very positive, affable candidates that came forward to apply for this job.  She stood out, and I think it was with great consensus that we believe she is appropriate for this role and that we do support her for this position.”

City Council Chair James Michael Bowers did his own research on Ewens nomination.

Two members of the public testified during the Public hearing. Jane Kinsey of the Group Watchdogs of Lincoln oppposed Ewens.

“The Mayor is determined to bring to Lincoln a West Coast, Democratic Liberal ideas, and she is following through with that.  I wish Miss Erwens (sic) success, but I’m not sure that she fits in with our community.”

“I think this is a wonderful opportunity for our City.  I think she will provide great leadership, and I applaud everybody for the vetting process and for her nomination.”

Ewens will replace Jeff Bliemeister, who resigned in January to take a private sector job.