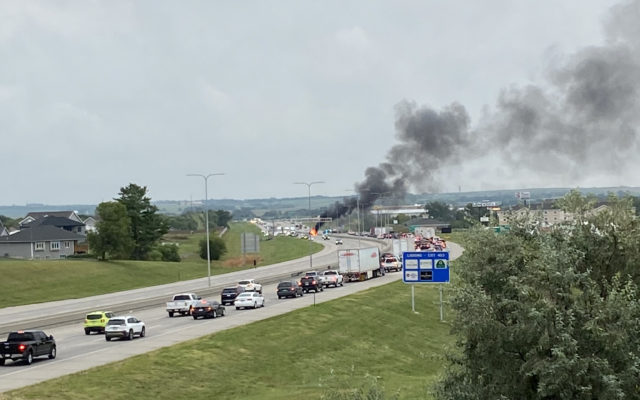 The scene of a deadly crash along westbound I-80 near 27th Street in north Lincoln on Saturday, Sept. 4, 2021. View is looking east. (Courtesy of Nebraska DOT)

LINCOLN–(News Release Sept. 5) — One person has been arrested after a multi-vehicle crash that claimed the lives of two people Saturday morning in Lincoln.

The crash occurred at approximately 9:25 a.m. Saturday on Interstate 80 near the 27th Street interchange in Lincoln. Units from the Nebraska State Patrol, Lancaster County Sheriff’s Office, Lincoln Police Department, and Lincoln Fire and Rescue all responded to the scene. The crash involved eight vehicles that were all traveling westbound on Interstate 80.

A father and son traveling together in a Chevrolet Colorado pickup were both killed in the crash west of 27th Street. The victims have been identified as Mark Kaipust, 41, and Taylor Kaipust, 7, of La Vista. Five other people were transported to Bryan Health West Campus with non-life-threatening injuries.

Investigators believe speed and inattention were the primary causes of the crash. Yorkwind Crawford, the driver of the semi, has been arrested for two counts of motor vehicle homicide. He was lodged in Lancaster County Jail. The crash remains under investigation.