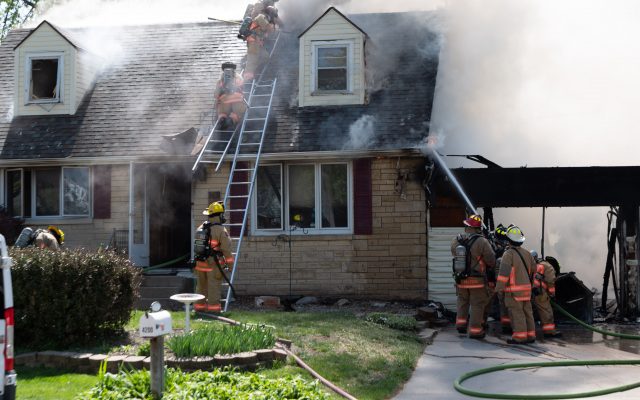 Firefighters work to put out a two-alarm fire late Thursday monring, April 29, 2011 in the 4200 block of Holly Road in south Lincoln. (Courtesy of LFR)

LINCOLN–(KFOR Apr. 29)–Two people have been displaced, while a dog is okay and a cat remains missing, after a two-alarm fire late Thursday morning at a south Lincoln home.

LFR Captain Nancy Crist tells KFOR News the call came in shortly after 11am from someone in the lot of Hiway Diner at 20th and Highway 2 that saw smoke and flames coming from the garage of a home to the north.  Crist says Engine 4 was on their way back from a training exercise and saw the garage fully involved in fire when they arrived. Posted below are videos taken at the scene from Rachael Miner.

The garage is totally gone and @LNKFireRescue is working to cut through the roof for ventilation. pic.twitter.com/V6Olx7Y3rh

There were no smoke alarms sounding at the time, according to Crist, and one resident was able to get out of the home safely.

Crist also told KFOR News the fire then spread from the garage into the house.  No injuries reported and the cause of the fire, along with damage amounts are still under investigation.

Lincoln Fire and Rescue crews were called to a house in the 4200 block of Holly Road, which is north of 20th and Highway 2, about a house fully involved in fire.  Based on video taken from the scene courtesy of Rachael Miner, the fire caused significant damage to the garage and spread into the home.

Here’s another look at the fire early on. You can hear the homeowner’s wife arrive and scream. The couple has a cat and it’s unknown if the cat made it out safely, but the dog is with a neighbor. pic.twitter.com/ygXYPXiKrj

As of 12pm Thursday, LFR crews remained at the scene doing overhaul work.  KFOR News is awaiting details from LFR on what happened.