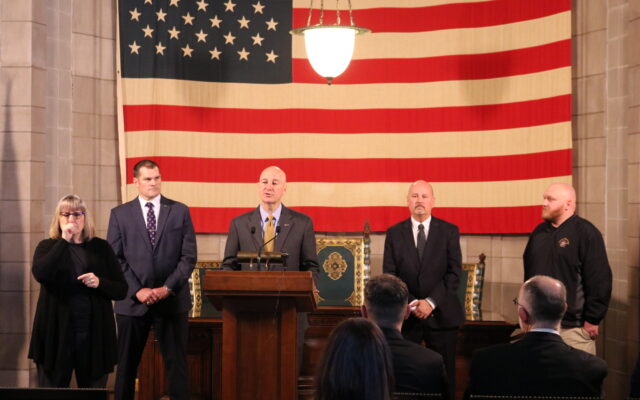 LINCOLN, NE (March 7, 2022)  – This morning, Governor Pete Ricketts hosted a press conference at the State Capitol to provide an update on the State’s strong success in growing its corrections workforce.

The Governor thanked the Nebraska Fraternal Order of Police (FOP), which represents corrections officers, for working closely with the State on the approval of a new compensation package in November 2021.  Since the agreement, the Nebraska Department of Correctional Services (NDCS) has seen an almost threefold increase in the number of weekly applications for corrections corporals.  NDCS has also cut in half the number of vacancies in protective services—from a high of 427 in the fall to 206 as of March 1, 2022.  The Governor also highlighted the innovative partnership between NDCS and Peru State College, which is preparing undergraduates studying criminal justice to take leadership positions in NDCS.

Jason Jackson, the State’s Chief Human Resources Officer and Director of the Nebraska Department of Administrative Services, joined the Governor for the press conference.  He credited the historic November agreement with the FOP with having advanced the State’s priorities of valuing its teammates and investing in public safety.  He commented on the strong relationship between the State and the FOP, which has made it possible to resolve workplace issues before they become problems.  He also recognized human resources teammates in NDCS for their great work to streamline the agency’s application process and more effectively advertise job openings.

NDCS Director Scott Frakes described the State’s November agreement with the FOP as the result of the most productive negotiations he’s witnessed throughout his career in public safety.  He shared several statistics about his agency’s success recruiting and retaining staff since the agreement took effect.  NDCS has received over 1,000 applications for corporals since December and hired 267 staff members across all job classifications.  Fifty of these hires are teammates who have returned to NDCS after having previously worked for the agency.  NDCS has been able to attract 118 new teammates from out of state—with incoming staff hailing from 33 states.  Director Frakes also noted the increasing size of the monthly graduating classes at the NDCS Staff Training Academy, from 39 in January to 69 in March.

Director Frakes credited veteran State teammates in corrections for their dedication to keeping Nebraskans safe during the challenges of the pandemic.  He emphasized the importance of holding on to great people, and he noted the trend of increased retention rates at NDCS so far in 2022.  He talked about the leadership programs offered to State teammates to help them develop new skills and better contribute their strengths on the job.  Additionally, Director Frakes touted NDCS’s partnership with Peru State as an inventive, one-of-a-kind initiative.  He said the apprenticeship program is setting an example nationally for how corrections agencies and colleges can collaborate.