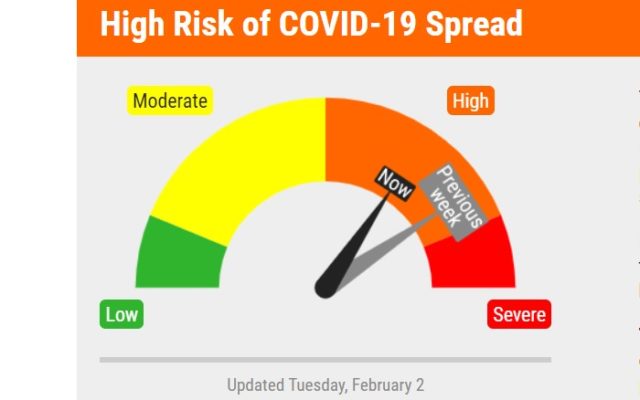 Lincoln, NE (February 2, 2021)  Lincoln’s Covid-19 Risk Dial dropped from “Elevated Orange” to “Mid Orange” for the coming week, signaling another decline in the number of virus cases and hospitalizations. Hospitalizations are down, the positive rate of tests are down, and other indicators are falling also.  Mayor Leirion Gaylor Baird and Health Director Pat Lopez appealed to the public, however, to continue wearing masks and practice social distancing.

“We are on the verge of getting the upper hand on this virus” said Lopez.  “The risk of this virus spreading in this community is still high, and we have many months to go before everyone is vaccinated.”

Officials announced that the next large scale vaccination clinic will be held Friday at the Pinnacle Bank Arena.  It will be held specifically for people over the age of 80.  All members of the Public are urged to sign up for a vaccination at the Health Department’s website, covid19.lincoln.ne.gov.

The Mayor’s Office also asked that only those who need to use the phone option to sign up.  Lopez said thousands of people called Tuesday morning to sign up, overwhelming the staff’s ability to handle the calls.  Those over 80, and those without access to the internet, are invited to call if needed to sign up.