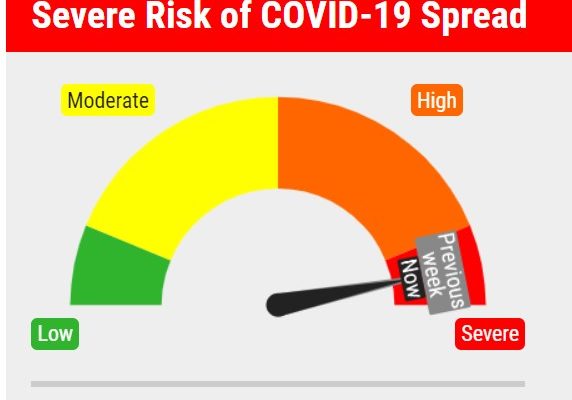 Lincoln, NE (January 5, 2020) Lincoln and Lancaster County lost three more residents to Covid 19 today, according to Health Department Figures, pushing the pandemic death toll up to 161.  The deaths included two women who were hospitalized, one in her 40s and one in her 90s, and a man in his 70s in a long-term care facility.

Case numbers have leveled off after falling for several weeks, and a new, more contagious strain is beginning to move across the nation.  All of those factors, and more, will hold the County’s Covid 19 risk dial in the Red category for the ninth straight week.

In her 100th briefing since the beginning of the Pandemic, Mayor Leirion Gaylor Baird said vaccinations are moving along nicely, and added that we have the real possibility of putting an end to the Pandemic this year.

City County Health Director Pat Lopez said she is pleased with the pace of the vaccination program, but called it a huge undertaking.  So far, she said, the County has received 9,800 doses and 7,400 have been administered.  She explained the factors behind maintaining the “Red” status:

In December, 74 Lancaster County residents died from COVID-19, and eight have died so far in January.  Those 82 deaths are more than half of the community’s 161 COVID-19 deaths.