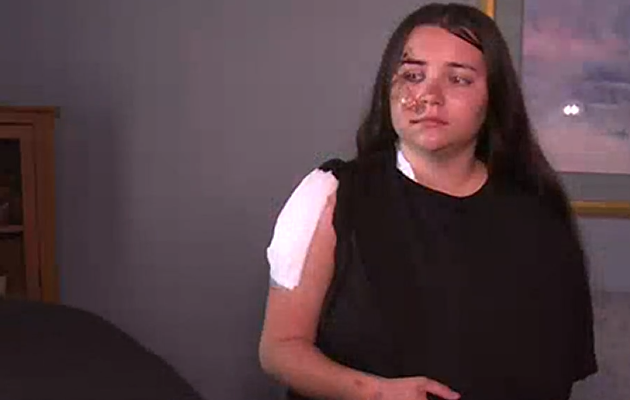 LINCOLN, Neb. (July 6, 2021) – An accident report shows officers have contacted the driver of a vehicle who reportedly hit and struck a woman lighting fireworks on Saturday night. The report shows the driver was distracted at the time of the incident, and citations are pending.

The victim, a 21-year-old Lincoln woman, told 1011 NOW on Monday she is left with unanswered questions and severe injuries. She was hit Saturday night near NW 6th Street and Dawes Avenue while lighting a firework.

She was sent flying across the street, and the driver of the Chevy Impala that hit her took off after striking a vehicle parked on the side of the road.

The State of Nebraska Investigator’s Motor Vehicle Crash Report says the driver was contacted and interviewed later by officers and said she was unaware of striking a pedestrian.

She was also distracted by something that was not a cell phone, the accident report shows, and it is unclear if alcohol or drugs were a factor in the incident.

“I wouldn’t wish this on anybody,” said Emilia Graham, the woman who was hit.

Graham now needs constant help and attention from friends and loved ones. Even simple tasks like getting off the couch and walking outside require at least one person’s assistance.

“My partner has had to get me out of bed, in bed, sit down, use the restroom, shower, feed me,” Graham said. “I can’t really lift anything up, I can’t open anything.”

A neighbor’s security camera captured the crash, which happened right before 11 p.m. on July 3 during an annual party that Graham hosted.

Graham is seen leaning down to light off a firework. Within seconds a car drives through the residential street. The direction it was traveling would also put it coming through an intersection with stop signs.

Dozens of Graham’s friends and family watched her get violently hit, thrown in the air, and land several feet away. Witnesses said Graham even put her hands out in front of her seconds before the car barreled into her, in an attempt to slow it down or brace for the impact.

“Did not stop,” said Adanya Hogan, a witness. “Went through the four-way stop. Went around the fountain, hit Emilia, and kept going straight. No brakes were pumped, no lights came on. They didn’t slow down, if anything they sped up after.”